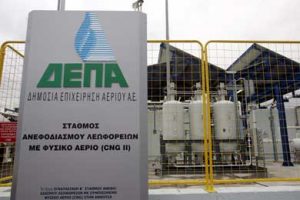 Moving to speed the pace of privatizations as demanded by international lenders, Greece has received a high bid for its state-run gas company DEPA of up to 1.9 billion euros ($2.5 billion) from Russian energy firm Sintez Group, the Moscow-based Kommersant business daily reported.
Sintez’s rivals in the bid to acquire DEPA and its subsidiaries include Russia’s top gas producer Gazprom, Azerbaijan’s state-owned SOCAR and two Greek groups.
The newspaper did not say how much its rivals were bidding, while Sintez Chief Executive Andrey Korolev told the Sunday edition of the Ethnos newspaper in Athens that the company has submitted a bid of between 1-2 billion ($1.34-$2.68 billion) for 65 percent of DEPA.
Sintez is controlled by Russian tycoon Leonid Lebedev, who is said to also be eying Greece’s natural gas grid operator DESFA. There was no comment from the company to the reports. Kommersant said that Greece’s privatization agency on Feb. 6 opened a data room for the bidders to assess the acquisition targets, with bids closing on Feb. 13 although companies have until April 12 to submit their binding bids.
Russian companies are looking to expand their power and add to a growing portfolio that includes power-generating facilities in Russia, oil and gas field development, and real estate.
Faced with trying to reduce a staggering $460 billion debt, Greece is moving to sell off its assets and lands in a scheme that is hoped to ultimately raise as much as 50 billion euros ($67.14 billion) although only a fraction has been realized so far. The government for now is settling on a target to bring in 11 billion euros ($14.77 billion) by the year 2016.