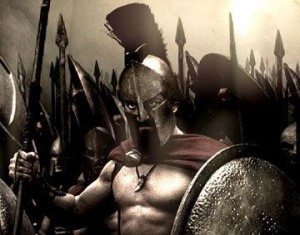 Back in 1961, the American nuclear physicist and research associate at the metallurgical laboratory in Chicago, Lyle Borst, visited Sparta influenced by the bravery of the ancient Spartans to study the weapons used in ancient Greece.
On his trip to Greece, Borst discovered that a “Manhattan District Project” in Sparta made steel in large quantities as early as 650 B.C.
Based on specimens he obtained from archaeologists, he theorized that steel was the secret weapon of the Spartans and that it was the reason for their military successes against enemies having only soft iron or bronze weapons.
Having such a weapon at that time, Borst said in a 1961 article in The New York Times, was almost the military equivalent of having an atomic bomb.
However, that actually stands as a scientific explanation of how 300 men managed to decimate the army of Persians, Medes and Cissians who amounted to 50,000 armed soldiers. Leonidas the brave was a 5th-Century B.C. Spartan military king who  led a small force of Greeks, mostly Spartan the famous 300, but also Thespians and Thebans, against the much larger Persian army of  Xerxes, at the pass of Thermopylae in 480 B.C. during the Persian Wars.
It was once again demonstrated (and scientifically as well) that except for the laconic matter-of-fact bravery that both Leonidas and the Spartans were famed for, they also used advanced technology ahead of their times. The Spartan shield was also said to be pivotal because it was almost impregnable.
They were defeated only because of the overwhelming odds and because a Greek traitor, Ephialtes, showed the Persians a pass that let them get around the Spartans, but it was a pyrrhic victory because the time the Spartans bought allowed the rest of Greece to unite and ultimately defeat the invaders, and save Western Civilization again, just as the Athenians did in beating the same foe 10 years earlier at the Battle of Marathon.