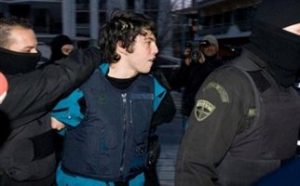 Four suspects in two armed bank robberies in northern Greece, also allegedly tied to terrorist activities – are refusing to talk to authorities but issued a statement that the robberies were political statements against authority.
“As anarchists we consider the option of robbing a bank a conscious choice of resistance,” said Nikos Romanos, Andreas Bourtzoukos and Yiannis Michailidis in the statement, adding that the attack on the capitalist establishment was part of their overall revolutionary activities. They were due to be transferred to Korydallos Prison.
In a statement posted on an anti-establishment website, three of the four young men stated they would not collaborate with authorities or apologize for their actions.
An outcry had developed after accusations they were beaten by police while in custody, which police denied, although Public Order Minister Nikos Dendias defended the release of photos that had removed signs of obvious injuries he said were sustained during their apprehension.
The suspects said they expected to be mistreated because they said they were in the hands of “enemies of freedom,” referring to the police. All four suspects have been linked to the urban guerilla group Conspiracy of the Cells of Fire, while police believe the young men could be the perpetrators behind a bomb blast at The Mall shopping and entertainment center in northern Athens in January.