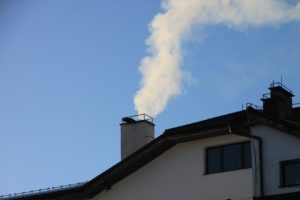 Greeks cutting back on household expenses are turning from oil to wood to heat their homes, but in turn are filling the night air with potentially hazardous pollutants, health care officials have warned.
The coalition government, under pressure from the EU-IMF-ECB Troika to impose more austerity measures, has pushed the price of heating oil to about 1.50 euros per liter by raising the tax on heating oil by 40 percent. Besides being a revenue-raiser, the government said the tax was meant to deter people from putting the oil in their cars instead of more expensive diesel.
That has caused a drop of a reported 80 percent in demand and forced many Greeks to forego buying oil and find other means to keep warm, using fireplaces, stoves, oil-filled radiators and halogen heaters. Some are chopping down trees in the woods and city parks.
A group of scientists from seven research centers are taking smog readings in several cities through February 10th to assess the environmental impact from the increased use of fireplaces and wood-burning stoves, the Athens network SKAI TV reported. The scientists, together with the Centre for Disease Control and Prevention, have warned that burning wood in the home releases 30 times more air pollution than using a well-maintained heating oil or gas-burning boiler.
They found that concentrations of particulates in the atmosphere from wood smoke increased 200 percent from December 2010 to the same period in 2012, stressing that the problem is especially acute at night, when demand for heating increases. The center warned an increase in air pollution can lead to respiratory problems as well as aggravating allergies and disturb the neurological and reproductive systems.
“More people are going to have breathing problems and go to hospitals and doctors and we might in the long term have serious problems and even be losing people,” Athanassios Vozikis, a lecturer in Health Economics at the University of Piraeus told SETimes.
People who venture out at night soon find they are covered with a sooty smell on their hair and clothes, as if they’ve been near a fire, especially in Athens and the country’s second-largest city, Thessaloniki, with the largest concentrations of the country’s population.
“It’s not just the wood. People are burning furniture, plastic, construction materials and even their slippers,” Giorgos Daskalakis, 48, who runs a wood-selling business, told SETimes. He said he sells hard wood from olive trees that burn cleaner but that makeshift stores have opened and are selling cheap wood that pollutes.
As he spoke, two customers, Christos Betsis, 30, and his brother Costas, 35, were filling their car trunk with wood. They said 50 euros worth would last 25 days in the fireplace in the family house they share with their parents. Using heating oil can cost up to 2 euros or more per hour. “The government has to reduce the price of the oil,” Costas told SETimes. His brother added: “We didn’t buy oil this year. It’s too expensive. It’s up almost 50 percent since last year.”
The problem has become so bad that the wood smog has been detected outside the main cities, including the western city of Patras and in northern suburbs of Athens. The national union of forestry workers has criticized the growing use of wood for fuel.
The government provides subsidies to help those who can’t afford heating oil, but Finance Minister Yiannis Stournaras said many who are eligible haven’t applied and that the government doesn’t have the money to do more. “I wish there was fiscal capacity do to so but there isn’t,” he said, adding that those who need help should “be patient for another year” and wait out the cold.
Takis Grigoriou, the climate change and energy campaigner for Greenpeace in Athens, said the wood smog phenomenon highlights the need to move away from both oil and wood as fuel and heat sources. “The idea behind heating oil subsidies is wrong,” he told SETimes. “We need to stop making people using oil.”
(Reprinted by permission of Southeast European Times, www.setimes.com)