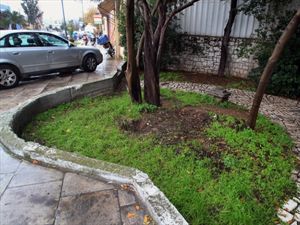 Greece’s General Directorate of Antiquities said a tree believed cut down for firewood on the ancient site of Plato’s Academy was not the same one under which he sat, but a replacement that was put there 36 years ago after what was left of the original was removed for safekeeping after a bus hit it.
The directorate said the olive tree, known as Plato’s sacred tree which was located until 1976 in the Sacred Way of Athens (Iera Odos), was felled in an Oct. 7, 1976 accident. What was left of the old trunk was moved into a building of the Agricultural University of Athens and is kept in a specially constructed display case.
Thanks to the University, a new olive tree was planted at the exact point where the old one was. The new tree had three logs of 30 centimeters each. One of the trunks which was dead, was removed on Jan. 6. The two live logs remain intact. Officials said they wanted to make clear that the tree that was removed was not Plato’s.