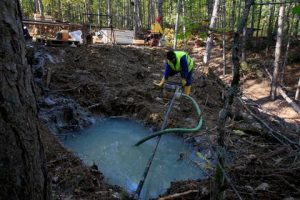 Hundreds of protesters demonstrated in Athens on Jan. 12 against a Canadian gold mining project in the northern region of Halkidiki that opponent said would cause irreversible damage to the local environment but which supporters said would help the economy.

“Yes to water, no to gold,” the protesters chanted as they marched on the Greek parliament. “Take your cyanide and get out,” they said. The protest was led by youths carrying felled trunks of oak and beech trees on biers, while other demonstrators wore decontamination suits. “If you want gold, go to bank safe boxes,” the protesters chanted.

A number of citizens’ groups, backed by the radical leftist party SYRIZA have been trying to derail the project since 2011, when the government allowed Hellenic Gold ,a subsidiary of Canadian firm Eldorado Gold, to dig in the area.

Another Canadian company, TVX, began an operation in Halkidiki nearly two decades ago before pulling out in 2003. Both Thessaloniki Mayor  Yiannis Boutaris and local authorities support the new project that is expected to create hundreds of jobs. However, the community remains divided.

Critics of the investment argue that the mining operation will drain and pollute local water reserves while filling the air with dangerous substances such as lead, cadmium, mercury and arsenic but backers said the work is critical and will provide jobs during the Greece’s crushing economic crisis.