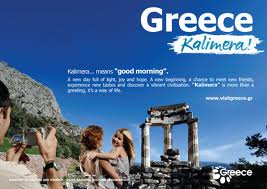 As one of the favorite tourism destinations for Austrians, according to representatives of the Austrian tourism market, Greece has a pavilion at the Jan. 10-13 Vienna International Tourism Fair, an event expected to draw more than 150,000 visitors and includes 800 participants from 70 countries.

The Austrian travel agency TUI estimated that the Greek tourism will recover from last year’s fall-off which saw revenues fall 3.3 percent in the wake of political and social unrest. Greece holds first place in bookings from Austrians, followed by Turkey.

The President of the Austrian Association of Travel Agents, Joseph Peter Leitner, noted that the increase in bookings to Greece could reach 20 percent in 2013. According to data, more than 500,000 Austrian tourists travel to Greece every year.

The Greek National Tourism Organisation (GNTO) pavilion is expected to host meetings with journalists and tour operators and feature events such as live Greek music performances, Greek dances and traditional cuisine of Greece. The Mayor of Corfu, Ioannis Trepeklis is scheduled to give a news conference on Jan. 11.