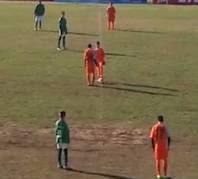 Forget Brazil 1970, Argentina 2006 or the current Barcelona team – the greatest team goal ever may have been scored by a bunch of kids in Greece.

The following video shows the team in orange playing amazing team work as they string 20 passes together straight from kick-off before finding the net. It is not the Dutch, but AO Giannina who scored the wonder goal.

It appears that all 11 Giannina players are involved in the move – even the goalkeeper plays his part– and the slick pass was made even though the pitch was a little dodgy. The rival team was Atromitos, who must have feared the worst after such an opening, which resulted in their losing 6-1.

The Greek youngsters on AO Giannina have drawn Europe’s attention as they have been the subject of British newspapers, the Guardian and the Telegraph.

According to the Guardian, in a move reminiscent of Argentina’s wonderful goal in the 2006 World Cup, AO Giannina, a team of Greek children, pulled off an amazing team goal straight from kick-off. The move features 20 passes by AO Giannina, who scored before the rival team got to touch the ball.

The Telegraph states that it sometimes takes the innocence of young footballers to remind us that football can be truly, unambiguously gorgeous. According to the newspaper, it’s the best thing Greek football has produced since 2004, only far more attractive.