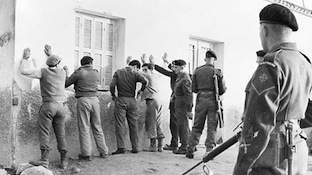 The Journal of D.P 743 – the number assigned to Renos Lysiotis during the British occupation of Cyprus when he was held prisoner, is set to be published and provide details of the troubled times from 1955-59 that he kept in a personal diary. He was 25 when he was imprisoned.
The young man had the idea of giving to his mother one page a time of what he had recorded. She, in her turn, was giving the papers-documents to the then Consul of Greece Rodis Kanakaris Roufos, who collected them and kept them until today in order to publish them as a book .
Lysiotis was the first head of PEKA (The Political Committee of the Cypriot Struggle) whichvoluntarily defended many Greek-Cypriots. Although in prison, he was able to sent correspondence to officers in the the Greek Army, the leader of the EOKA guerrilla organization and EOKA B paramilitary organization, Georgios Grivas Digenis.
“I think that my journal reflects not only my own life in the detention centers in Pyla,  Kokkinotrimithia and Pirio, but also all those incarcerated in detention centers …” he writes. The journal describes inhuman conditions of detention, and the fight by Greek-Cypriots to finally gain independence and get out from under British control. This book includes unpublished photographs and old documents as well as Digenis’ letters.