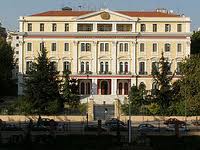 Greek expatriates from the former Soviet Union held a protest on Dec. 29 outside  the Ministry for Macedonia and Thrace in Thessaloniki against the possibility of losing their 300 euros OGA pension with implementation of new austerity reforms.
The Panhellenic committee of Greeks from the former USSR organized the protest, underlining that 95% of the 40,000 Greek expat pensioners from the former Soviet Union do not meet the newly-introduced amendments concerning pension qualifications and will thus have no claim to their OGA pensions.
According to the new  agreement between Greece and its international lenders, recipients will be granted their pensions only if they meet a series of requirements including that they have completed 20 years of legal and permanent residence in Greece before applying for the benefit.
The committee delegates met with the director of the office of the Minister for Macedonia and Thrace, Theodoros Karaoglu, and complained that the cut will have a harsh effect on their lives. “This is a new crime against the Pontiac Greeks from the former Soviet Union. They cannot kick us out of Greece in this way. We are here to stay and help Greece make its way out of the crisis. This measure introduced now is an insult to all basic human rights” commented the committee representatives.
Independent Greeks MP Gabriel Avramides and the Mayor of Ampelokipi-Menemeni, Lazaros Kirizoglu, also attended the protest and expressed their support to the demands. The two politicians asked for the alteration of the criteria concerning the provision of pensions.
One of the protesters, George Piperides, told the Greek media that without the OGA pension that he and his family will be destitute. “I am 67 years old and came to Greece in 1991 from Sokhumi. For the past two years I am receiving pension from OGA. My wife is handicapped and my daughter is unemployed. If they take away my pension I will surely die.”