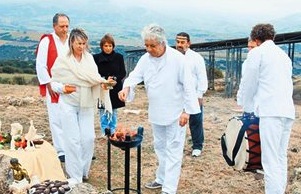 Despite sub-zero temperatures, bitter cold, a strong wind and snow covering the top of Mount Olympus, Dodekatheists  decided to climb the slopes to celebrate Dionysus’ birthday and Hercules Ilioforos’ (brings the sun) incarnation.
Dodekatheists, worshippers of the ancient gods of Greece, gathered from across the country to mark the winter solstice with an ancient ritual.
Dressed in white robes, they erected statues and ivy branches singing hymns and prayers. They invoked Hercules, sang orphic hymns in ancient Greek to Dionysus and called on the sun to bring the creation into the nature and light into people’s lives. After the feast they visited the village tavern where they celebrated over lamb and red wine.
On Dec. 21 on the winter solstice the sun begins to climbs higher in the sky and until Dec. 24 when the longest night of the year is marked. The winter solstice is the time at which the Sun appears at noon at its lowest altitude above the horizon.
In the Northern Hemisphere this is the Southern solstice, the time at which the Sun is at its southernmost point in the sky, which usually occurs on Dec. 21-22 each year. That is why the ancients worshiped the sun both like a god and creator of time and seasons, vegetation and creation.