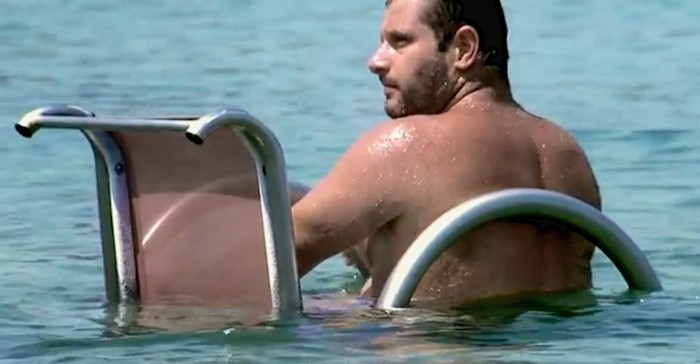 The Greek documentary Seatrac, a story about a way that people in wheelchairs can enjoy the sea,  is only three minutes long but manages in this little time to make direct references to culture, love, compassion, understanding and human rights to a better and more qualitative life.

Seatrac is the only Greek video among 66 from around the world taking place in a competition launched by popular website Vimeo.com. The joint work of Nikos Logothetis, Ignatios Fotiou and Gerasimos Fessian has made it to the 10 semifinalists .
In summer 2008, Fessian and Ignatiou met and were introduced to the idea of developing a means to allow people with mobility disabilities to get into the sea by themselves. The idea was something extraordinary for the two men, whose field of expertise rather revolved around advanced synthetic materials, but the challenge was quickly accepted.
With the support of their professor and director of the Laboratory of Technical Mechanics and Vibrations Vassilis Kostopoulos, the financial support of the University of Patras and the former municipality of Achaia, the two men had the initial funding for their project.
When Logothetis first saw the invitation of the Vimeo competition asking for submissions of 3-minute documentaries about innovations that could help people live a better and easier life in the future, he was not really sure where to begin with. But a few weeks later and totally out of the blue, he saw a TV travel program where Fessian and Ignatiou were invited to talk about their Seatrac model.
The cooperation soon began to form. For the three men, this project provided a solution to an existing problem. “You cannot really comprehend the problem unless you imagine what it really is like to carry an adult man or woman in their hands to get him to the sea water” noted Logothetis. For Fotiou this was a chance to contribute to the community and fully realize the need to be independent for people with mobility disabilities.
Technology is nothing but a means in the hands of people. Life can become easier and better but people have to feel like helping each other in their times of need. For the creators of Seatrac it all comes down to culture and consciousness: people must always think of others who are facing difficulties with their everyday life. Appliances as Seatrac could contribute to the society’s better coexistence with disabled people, the inventors said.
Fotiou said he believes the documentary can introduce Greeks and the world to an idea that makes life better for people with limited abilities and who love going into the water and demonstrates the entrepreneurial spirit of Greeks during a crushing economic crisis.
Logothetis was born and raised on the island of Lefkada. He gave up on his logistics studies to study film direction. He has shot three short films so far and a documentary feature titled Outside the Walls.
Fotiou was born in Patras and is a postgraduate student of the Department of Mechanical Engineering and Aeronautics of the University of Patras and member of the Technical Chamber of Greece.
Fessian was born in Patras and is a philosophy student at the University of Patras. He is socially active and said he wants to break down racial discrimination against disabled people and to integrate them into society.
Watch the video and vote for it: