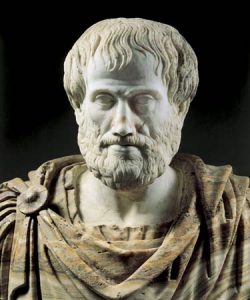 Four ancient Greek philosophers rank among a list from the Massachusetts Institute of Technology of people who have most influenced the planet.
They may have lived before almost 2,500 years ago, but Aristotle, Plato, Archimedes and Socrates are still the most important founding figures in Western philosophy while also leading entries for the popular online encyclopedia, Wikipedia .
Having collected data from all Wikipedia editions, MIT researchers, led by César A. Hidalgo, placed Aristotle (384-322 BC) at sixth. Aristotle, a student of Plato and teacher of Alexander the Great, was born in Stageira, Chalcidice. He studied in Plato’s Academy, where he was later taught politics and rhetoric.
Plato (428-347 BC) ranks ninth. The great Athenian philosopher and founder of the Academy in Athens, wrote Apology of Socrates and gave the theory of an ideal state in his most celebrated book The Republic.
Archimedes of Syracuse, fills the top ten and is considered to be one of the greatest Greek mathematicians, physicists,  engineers, inventors and astronomers of the antiquity.  He is also known for crying “Eureka!” running naked in the streets, having discovered the principle of specific gravity.
The often more-celebrated Socrates was listed at 13th. He had been Plato’s teacher and one of the founders of Western philosophy. Socrates has become renowned for his contribution to the field of ethics, and it is this Platonic Socrates who also lends his name to the concepts of Socratic irony and the Socratic method, or elenchus.
Jesus Christ was number 1 on the list. The researchers of Micro Connections group, who work at the Media Lab of the American University MIT, stressed that the list was limited to those who were born before 1950 and included how national culture is perceived through its representatives.
The Top 20:
1. Jesus Christ: Prophet and central figure of Christianity
2. Confucius: Chinese philosopher
3. Sir Isaac Newton: British physicist
4. Gandhi: Indian politician and activist
5. Albert Einstein: German physicist
6. Aristotle: Greek philosopher
7. Vasco da Gama: Portuguese explorer
8. Leonardo da Vinci: Italian artist
9. Plato: Greek philosopher
10. Archimedes: Greek philosopher
11. Mao Zedong: Chinese communist revolutionary
12. William Shakespeare: English playwright
13. Socrates: Greek philosopher
14. Karl Marx: German philosopher and socialist
15. Michaelangelo: Italian sculptor
16. Gautama Buddha: Nepalese spiritual teacher
17. Nelson Mandela: South African politician
18. Galileo Galilei: Italian physicist
19. Julius Caesar: Roman emperor
20. Joseph Stalin: Soviet leader