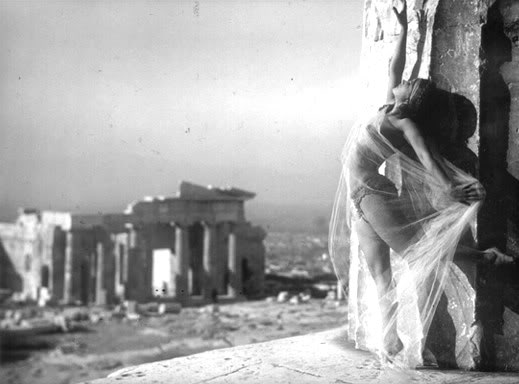 The Athens-based AlphaDelta gallery is presenting a solo show-tribute to the photographer Nelly (also known as Elli Sougioultzoglou-Seraidari, 1899 Aydin, Asia Minor – 1998 Athens, Greece) entitled Un nouveau regard (A new glance).
At the exhibit, which runs from Nov. 10 this year to Jan. 12, 2013, a series of works of the famed Greek photographer will be shown, including New York Easter Parade. She was known for her work in what was called New Objectivity.
Her work, which the photographer created at the urging of Harper’s Bazaar magazine director Alexey Brodovitch is being displayed for the first time since 1992, with a selection of her portraits, landscapes and photographs of the Acropolis monuments.
Nelly studied photography in Germany, near the great classic photographer Hugo Erfurt and later, with Franz Fiedler, she was initiated into the new approach in photography and the European Neο-Romanticism.
She opened her first studio at Ermou street in Athens in 1924 and her lens captured important personalities and themes of that time, such as the famous dancer of Opera Comique Mona Paeva dancing nude in the Parthenon, the Delphic Festival and Eva Sikelianou, Dimitris Mitropoulos, principal conductor of the Metropolitan Opera of New York etc.
Her avant-garde pictures of nude Mona Paeva on the Parthenon were published at the French magazine Illustration de Paris and caused a scandal in the small city of Athens of that time. She was defended by Pavlos Nirvanas in his column in Elefthero Vima newspaper (May 1929).

Since her studies and her nudes at Fiedler’s studio in Germany, Nelly removed the background’s elements by focusing her attention on the theme, resulting in reversing voluntarily the references of orientation and the final image to be formed as a mix of realistic and abstract types.
In that way, she managed to incorporate the spectator’s wonder as an element of the image. Knowing that she is the one directing the spectator’s gaze through the lens of the camera and that he will identify with her position, she accentuated the wonder by giving viewers the chance to read the image in a double way in relation to the earth’s horizon. 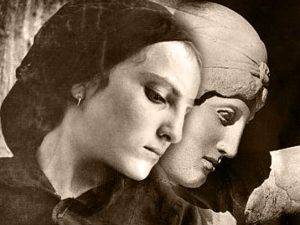 Her classical education and  admiration of Ancient Greek civilization contributed to her photographic work in Acropolis in a way that the latter has become decisive for the artist and also for the history of photography and architecturel.
In her portraits Nelly’s uses artificial light, leaving one part of the form in the dark, while the background remains empty, as a reference to the Great Masters of the Renaissance. The aim of this work was the search for the spiritual element, the poetic atmosphere and the demonstration of the form’s most profound essence.
During World War II, she went to the United States, where she stayed for 27 years and The Metropolitan Museum of New York bought a large series of her Acropolis photographs.
In 1966 she returned to Greece and presented her work in numerous exhibitions, with the last being Nelly’s: The Body, the Light and Ancient Greece, the official Greek participation in the Cultural Olympiad of Barcelona in 1992.