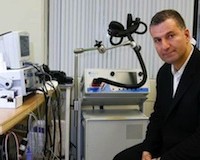 Greek psychiatrist, Dr. Jeff Daskalakis, is one of the research leaders working on a new treatment  for depression. Daskalakis is a psychiatrist at the Center of Addiction and Mental Health in Toronto. He is heading research regarding a modern and safer approach than electroshock treatment, a new method called “seizures treatment.”

Researchers say that they have seen better results in patients having undergone this treatment as nearly 50 percent had positive results. In an article cited in Pubget, Daskalakis explains: “Here we review evidence to suggest that a fruitful, but neglected, strategy for improving rTMS efficacy may be to explore alternatives to the conventional stimulation target in the dorsolateral prefrontal cortex (DLPFC.)”

The Phenomenon of the Twin Lakes of Zerelia in Greece