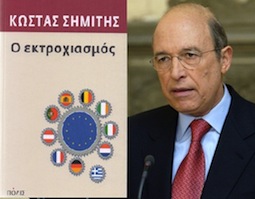 The man who led Greece into the Eurozone has attacked former prime minister George Papandreou’s handling of the debt crisis, adding to infighting threatening the PASOK Socialist Party’s position in the ruling coalition.
Costas Simitis, who was prime minister from 1996 to 2004 and ushered the country into the single currency in 2001, said in a new book that the government of his former ally and fellow Socialist was naive and incompetent when the crisis erupted in late 2009. “It was not up to the task,” Simitis wrote in his book called Derailment.
“It reacted late, without due preparation … it held utopian positions, such as the limitless and unchecked issuing of (joint) euro bonds,” he added. The attack on Papandreou, who still wields behind-the-scenes influence in what was once Greece’s largest political movement, came as the Socalist Party is in turmoil. Papandreou, despite being forced out of office in November of 2011 by relentless protests against austerity measures he imposed on the orders of international lenders and for what critics said betrayed the party’s principles, is the President of Socialist International.
Current PASOK leader Evangelos Venizelos ejected six of the party’s 33 deputies from its parliamentary group for failing to back an austerity package and another quit following the vote which he supported. The ejections and defections, including one from the ruling New Democracy Conservatives, have cut the coalition government’s majority to 18 seats in the 300-member Parliament. The other partner, the Democratic Left, has 16 seats.
Papandreou’s staff was not experienced enough to cope with the crisis, said Simitis, whose own government was wracked with scandal, including alleged corruption in the lead-up to the 2004 Olympic Games held in Athens. “His advisers, more numerous than those by any other prime minister, formed different teams which did not co-ordinate and were antagonistic to each other,” he said.
Papandreou’s first finance minister, George Papaconstantinou, wrongly rejected a debt restructuring, Simitis said. Papaconstantinou was replaced by Venizelos, who doubled income and property taxes, taxed the poor and imposed 74 percent losses on Greek investors to write down the country’s debt but locked Greece out of the private markets. “The government was insisting that the debt was viable and that developments were favorable,” he wrote.
Greece’s deficit and debt spiraled out of control after the global financial crisis and Papandreou – after denying he would – went to the International Monetary Fund to ask for a bailout. The IMF, along with the European Union and European Central Bank formed the so-called Troika which is putting up $325 billion in rescue loans for the country.
With total Greek debt estimated at 175% of Gross Domestic Product (GDP) and forecast to rise to nearly 190% next year, Eurozone finance ministers will meet on Nov. 12 to try to determine just how off-track Greece is and how to respond although they are unlikely to release a long-delayed $38.8 billion loan installment even though Prime Minister Antonis Samaras pushed a $17.45 billion spending cut and tax hike plan through Parliament amidst social unrest.
Simitis also accused the European Commission of turning a blind eye to overspending by his conservative successor, then New Democracy leader Costas Karamanlis. During his government, Simitis reduced the budget deficit and public debt to make Athens qualify for Eurozone membership but the Karamanlis government and German media accused him of faking the country’s fiscal figures to adopt the single currency, with the connivance of other European leaders at the time, such as German chancellor Gerhard Schroeder.
Simitis rejected that charge. “This accusation ignores the facts,” he wrote in the book. A debt swap he conducted with Goldman Sachs in 2001 was also common practice among European governments at the time, he said, although many analysts have said it helped create the country’s crisis through dubious practices. Simitis also killed bills to make government expenditures more transparent as corruption was running amok.
(Source: Reuters)