Kenya’s Raymond Bett won the 30th Athens classic marathon on Sunday in a new fastest time of of two hours, 11 minutes and 35 seconds.
The 28-year-old Bett was followed across the line by five of his countrymen with second place going to Paul Kosgei who clocked 2:12.20 and Alex Kirui in third at 2:12.26.
Bett, who also won in 2010, beat the previous race record set last year by Morocco’s Abdelkerim Boubker by five seconds. 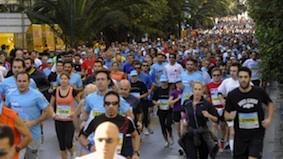 Boubker finished eighth in this year’s race in 2:18.10.
“The weather was perfect and the race was very competitive. I will return again next year because I love the country and its people,” Bett said.
The women’s race was won by 29-year-old Kenyan Consalater Chemtai Yadaa in a time of 2:40.00 beating out Ukraine’s Svitlana Stanko who finished seven seconds behind.
Some 26,000 runners from dozens of countries took part in mostly sunshine weather and cool temperatures in the classic marathon which began just a short distance from the tumulus erected for the Greek dead of the battle of Marathon, and the shorter five and 10-kilometre races in downtown Athens, all finishing at the all-marble Panathenaic Stadium, site of the first modern Olympics in 1896.
A 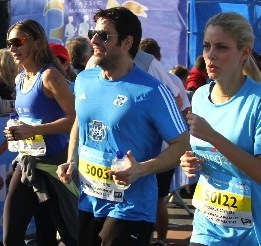 lot of interest is placed on the non-governmental groups that are participating in the race, whose presence is actually supporting groups of society facing difficulties in life. This is one of the basic reasons pushing a lot of people, mainly from the arts, to participate in organizing the event. As in last year’s race, this year again the following participated and ran: Anna Prelevits, Gloria Mika, the General Secretariat of the Greek National Tourist Organization Nikos Karahalios, actor Alexis Georgoulis (foto) as well as Zeta Douka.
According to legend, the 42 kilometre (26 mile) distance from Marathon to Athens was first run by Pheidippides, an Athenian messenger who in 490 BC dashed to the democratic city states of Athens and Platea to announce victory of the citizen soldiers of Athens over soldiers of the Persian empire, before dying of exhaustion.
Dead from heart failure at the end of the race.
The death of a man around 60 years old scarred the 30th Athens Classic Marathon.
According to current information from Evangelismos Hospital and EKAB, as soon as the man terminated the race he took part in, he lost his consciousness.
The man was taken to the hospital in an ambulance, but despite doctors’ efforts, he died.
(source: AFP)