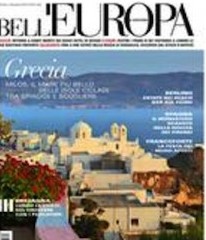 The popular Italian travel magazine Bell’Europa is presenting an extensive report on the Greek island of Milos with its unique archaeological and religious monuments, beautiful beaches and the delicious culinary flavors.

The Greek island made up the front cover of the magazine and photographer Paolo Giocoso, who has been to Milos before, included an array of stunning shots that captured the island’s allure.

“Milos, the most beautiful sea of the Cyclades,” reads the report from the magazine, which has been widely circulated in Italy the last two decades.