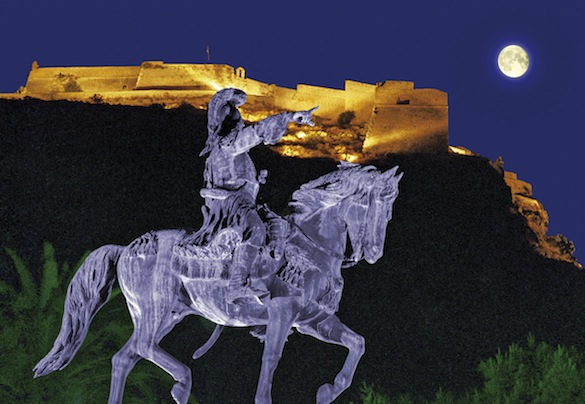 A maze of narrow streets on the slopes of a small rocky peninsula in the northeastern Peloponnese, Nafplio is one of the most picturesque towns in mainland Greece, a popular seaside retreat close enough to Athens for day trips or weekend jaunts. But the town that served as the capital of newly liberated Greece from 1829 to 1834 offers visitors much more than just a quiet holiday by the sea.

Beyond the trendy harborside cafés and hip boutiques so attractive to tourists, Nafplio’s history is traced out in crumbling ancient ruins, Byzantine churches tucked into meandering alleyways, and Frankish, Venetian, and Turkish buildings that are the architectural legacy of 600 years of conquest at foreign hands — a living reminder that Greece is no stranger to crisis and that Greeks have a long history of surviving under siege.

A Fortress With A View

Climb 857 steps to the Palamidi fortress, a key stronghold in the Greek War of Independence considered impregnable until the Greeks wrested it from the Turks in a surprise attack in 1822. A system of eight independent bastions connected by massive walls, the fortress was an early 18th Century Venetian construction built atop a 216-meter rock with a stunning lookout over the town — a jumble of red-tiled roofs framed by sweeping views of the gulf of Argolis and surrounding mountains. For a less arduous ascent to the top, you can drive up a two-mile road from the south side.  Either way, bring your own water.
Archaeology in the Square
Take in Neolithic to Roman-era finds, including a 15th Century B.C. bronze suit of armor, at the recently renovated Archaeological Museum, housed in a 1713 Venetian building at the western end of Syntagma Square, the central square ringed with cafés and shops. Opposite the museum is the Vouleftiko, a converted mosque that served as the first parliament of liberated Greece from 1825 to 1826.
Boutiques and Side Streets
Roam winding side streets lined with graceful neoclassical buildings, bursts of bougainvillea cascading from wrought-iron balconies. Among the plentiful boutiques and souvenir shops, look for To Enotio, a workshop for traditional shadow puppets (40 Staikopoulou Street), and several shops selling handcrafted amber kombologia, or worry beads, including To Kombologaki T’Anapliou (19 Plapouta Street). For lunch, head to Staikopoulou Street, where you’ll find a high concentration of restaurants offering sidewalk seating and traditional Greek fare of reliable quality. For mezedes — Greek-style tapas — choose O Noulis on Moutzouridou Street.
History’s Shadow
Bear witness to the darker side of history at the church of Agios Spiridon, where modern Greece’s first President, Ioannis Kapodistrias, was assassinated in 1831. The bullet hole is still visible in the church walls, and the fountain his assassins hid behind still stands across the street.
From Beach to Citadel
Cool off at Arvanitia beach, a pebbled beach a few minutes’ walk from the center of town. Looming overhead is the Akronafplia citadel, where a fortress has existed since ancient times, the original Bronze Age walls serving as a foundation for successive rebuildings by Byzantines, Franks, and Venetians. Though little remains of the fortifications and the hilltop is now the site of a luxury hotel, you can still see the ruins of a Byzantine gatehouse with frescoes from 1291 and the lion-crested gate of a Venetian bastion.
Sweet Interludes
Replenish your energy levels with a snack at Katsigiannis’ pastry shop (18 Staikopoulou Street), where you can indulge in traditional Greek specialties like galaktoboureko, wedges of creamy semolina custard between layers of syrup-drenched phyllo.
An Evening Stroll — or Boat Ride
Join the evening throngs for a pre-dinner stroll along the elegant harbor area edged with waterfront cafes. Just offshore is the islet of Bourtzi, fortified with a 15th century castle of its own, which you can visit on boats that leave from the northeastern end of Akti Miaouli, the main coastal promenade.
Seafood by the Sea
Stay on Akti Miaouli for a seafood dinner at Agnanti Restaurant-Cafe. The food is fresh and well prepared, but the real treat is the location on an overhang by the sea. Save room for dessert at Antica Gelateria di Roma, Nafplio’s much-lauded purveyor of authentic Italian gelato on 3 Farmakopoulon Street.