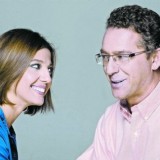 Continuing a crackdown on journalists attacking government policies, Greece has pulled a popular morning news show off the state-run network that is funded with mandatory contributions from taxpayers after the program’s presenters asked if a government minister would resign over allegations of police torture.
State NET TV suspended Marilena Katsimi and Costas Arvanitis’ program after an on-air exchange in which they said a medical report supported the torture allegations and asked if Public Order Minister Nikos Dendias would resign, as he had denied there had been any mistreatment of people taken into custody.
The suspension came as the government of Prime Minister Antonis Samaras ordered the arrest of an investigative journalist for publishing on his web site a list of 2,059 Greeks with $1.95 billion in deposits that a previous government said it had lost and while Samaras’ government has failed to vet the names for possible tax evasion.
Samaras said a $17.45 billion spending cut and tax hike plan that will impose more austerity measures on beleaguered Greeks was ready to be pushed through Parliament although he made no mention of tax evaders costing the country $70 billion, despite pressure from international lenders to go after them.
Fellow journalists on NET began a work stoppage in protest at the government’s action. Arvanitis said the decision to suspend him and Katsimi appeared to be politically motivated and an attempt to muzzle the media. “This is not about us anymore, this is about censorship in state TV,” Arvanitis told Reuters in an interview. “Will we be given a list of words and comments that we are allowed to make, from now on?”
State television said the two were suspended for making “unacceptable allusions” about Dendias, and for failing to give him a chance to respond to the charges. He has denied the medical reports showed evidence of torture of protesters during anti-fascist rallies, as alleged by a newspaper.
Arvanitis said state TV’s position was wrong. “When a journalist makes a comment on air or in text, he doesn’t need to have the response of the politician,” he said. “We would also like to say that we are sorry because yesterday we also commented on the U.S. elections but we didn’t think to call (U.S. President Barack) Obama to get his view on the issue.”
(Sources: Kathimerini, Reuters)