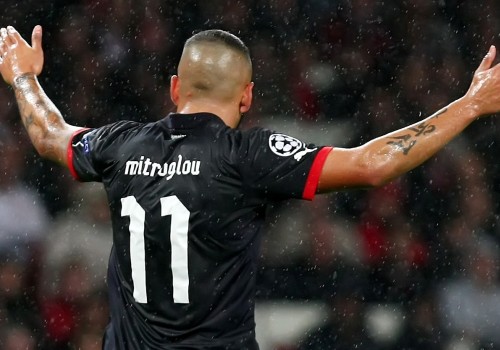 (AP) – Greece striker Kostas Mitroglou scored in injury time as Olympiakos came from behind to beat struggling French champion Montpellier 2-1 in the Champions League on Wednesday.
Gaetan Charbonnier’s first Champions League goal was not enough for the hosts, with Greece defender Vassilis Torosidis equalizing in the 73rd with his team’s first shot on target. Mitroglou then pounced one minute into stoppage time for the victory.
Olympiakos are third in the Group B table after three games, with Montpellier taking over the bottom spot with one point as Germany’s Schalke lead with seven points, one point ahead of English giants Arsenal.
Montpellier coach Rene Girard was banned from the dugout and fined for directing an obscene hand gesture at the Schalke bench after the teams drew 2-2 three weeks ago.
Striker Rafik Djebbour missed a great chance to equalize in the 55th when Francois Modesto curled in a ball from the left and Djebbour failed to test goalie Laurent Pionnier – who was replacing Geoffrey Jourdren after he was dropped for criticising Girard’s team tactics three weeks ago.
Belhanda twice went close as the home side pressed for a second goal, but Montpellier was caught cold in the 73rd when Torosidis dragged a high ball down and poked it past Pionnier.
In a frantic finale two substitutes combined to grab the winner as Djamel Abdoun beat Henri Bedimo and fed Mitroglou, allowing the striker to slot the ball easily past Pionnier for a precious three points.