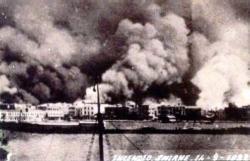 A commemorative event entitled Smyrna – Asia Minor, 90 Years of Memory, 1922-2012 was organized by the Greek Community of Uruguay paying tribute to the memory of the victims of the Asia Minor Catastrophe.

The idea behind the event was introduced by Greek teacher Dimitris Godevenos who works in a Greek school of the South-American country. The event featured a photo exhibition of the era, video footage with Spanish subtitles shedding light on the cosmopolitan life of Smyrna and the high cultural and scientific qualities of its people.

Traditional Smyrneika songs and dances were performed by young students and members of the group Hellas. The event was emotionally overwhelming for those in attendance, especially descendants of Asia Minor refugees.The Greek Ambassador to Montevideo, Louis-Alciviadis Abatis also attended, as well as many Uruguayan Philhellenes interested in the events that marked Modern Greek History.