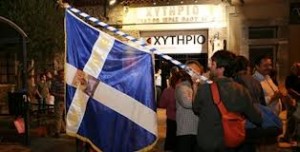 Police have brought charges against a Member of Parliament of the far rightists Golden Dawn party for stopping them when they tried to arrest a protester at a demonstration that blocked the showing of a play that the group feels is blasphemous.
Christos Pappas and several other Golden Dawn MP’s joined religious protesters who shut down – for the second time in a week – a scheduled showing of American playwright Terrence McNally’s production, Corpus Christi, which portrays Jesus and the Disciples as gay and living in Texas. The protest turned into scuffles outside the Hytirio Theater in central Athens.
As can be seen in a video on the Internet, after police arrested one demonstrator and put him on a police bus, Pappas went inside and removed him while police did nothing. The video has been forwarded to a prosecutor, who is to decide what charges Pappas will face and whether any police officers should also be charged for not doing their duty. It was unclear whether he can be prosecuted, however, as MP’s enjoy immunity against all crimes.
Another Golden Dawn MP at the protest, Ilias Panagiotaros, is alleged to have threatened the actors in the play, telling them, “Your time will come.” Party spokesman Ilias Kasidiaris, also an MP and is facing assault charges in another case, declared that Golden Dawn would “intervene forcefully whenever the religious sensibilities and collective history of Greeks is insulted.”
The extremist party advocates a Greece for Greeks only, wants all immigrants deported, land mines planted at the country’s borders, has intimidated homosexuals, has an agenda that is also anti-Semitic and is staunchly religious. It is rising rapidly in the polls and has already overtaken the once-dominant PASOK Socialists in Greece’s political standing.
Media reports said that Manolis Vamvounis, a journalist with Lifo magazine, was reportedly beaten and verbally abused by protesters, while police forces allegedly stood by. “The police is next to us. I shout ‘They’re beating me, aren’t you going to do something?” he wrote Vamvounis on Twitter.
“I move away so I can look on from distance. A well-known Golden Dawn MP follows me. He punches me twice in the face and knocks me to the ground. While on the ground, I lose my glasses. The Golden Dawn MP kicks me. The police are just two steps away but turn their back,” he added.
Two politicians from SYRIZA and two from Democratic Left were at the theater for the premier. One, Nikos Bistis of Democratic Left, said that requests for a public prosecutor to come to the theater were ignored. Video footage also shows a Golden Dawn MP, Christos Pappas, boarding a riot police bus to release one of four people who had been detained at the protest. The video does not show authorities trying to stop Pappas.
Besides Pappas, Golden Dawn MPs Elias Panayiotaros and Giorgos Germenis attended the protest. Riot police used tear gas to deter protesters from entering the theater, where actors and the audience were trapped.
Some 100 protesters threw yogurts at the theatre’s entrance, while four men were arrested. A video which shows an MP releasing someone in detention on the police bus and Panayiotaros swearing and using threatening language has become popular on the Internet.
Last June, the Holy Synod of the Greek Orthodox Church condemned the play as blasphemous and called the faithful to reject it.  First staged in New York in 1998, Corpus Christi dramatizes the story of Jesus and the Apostles as gay men living in modern-day Texas and shows Judas betraying Judas because of sexual jealousy and Jesus administering gay marriage between two apostles.