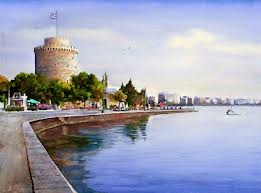 Thessaloniki will celebrate the 100th anniversary of its liberation and incorporation into Greece with a three-day international symposium and an historical exhibition open to the locals and visitors of the Northern port city.
Entitled Thessaloniki: A City in Transition, 1912-2012, the scientific symposium will be held from Oct. 28-30 bringing together experts from different social sciences, such as history, anthropology, economics, law, historiography, international relations and the arts.
The scientific committee for the conference includes scholars and academics, including: Konstantinos Svolopoulos, Emeritus Professor of the University of Athens; Professors Vassilis K. Gounaris, Ioannis D. Stefanidis and Dimitris Livanios of the Aristotle University of Thessaloniki; and Mark Mazower, British Professor of Columbia University in New York. Dimitris Keridis, Associate Professor of the University of Macedonia, is the head of the organizing committee for the conference.
The symposium aims at promoting Thessaloniki to the world and will mainly revolve around the decadence of West – including Europe – the rise of China and Islam after the Arabic Spring. Organizers expressed hopes of establishing the symposium on an annual basis.
The event will be held at the Conference Centre of the Music Hall of Thessaloniki and be opened by Mayor Yiannis Boutaris. The opening speeches will be held by prominent historians Mazower and Svolopoulos.