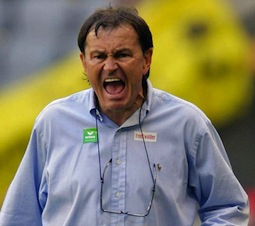 Troubled Greek giants AEK Athens have appointed German Ewald Lienen as coach after they suffered a terrible start to the Super League season.
The 58-year-old former Panionios and Olympiakos Piraeus coach has signed a one-year deal with AEK for a reported 100,000 euros per season, replacing Vangelis Vlachos who was sacked on September 30 after a poor start to the season.
“AEK announces that it has reached an agreement with the coach Ewald Lienen to take over the coaching role until 30.6.2012, with the option to extend the contract for another season,” AEK said on the club website (www.aekfc.gr).
Lienen has the task of reversing the club’s fortunes after Vlachos presided over one of AEK’s worst starts to a domestic season, with the Yellows losing four of their first six games.
He coached Panionios from 2006 to 2008 and also had a two month-stint at Olympiakos in 2010, parting company with the Piraeus club after suffering elimination from the Europa League qualifiers.
AEK have struggled for months with unpaid debts and club president Thomas Mavros oversaw almost all the first-team squad being sold off or released during the transfer window in order to slash the wage bill.
(source: Reuters, eurosport)