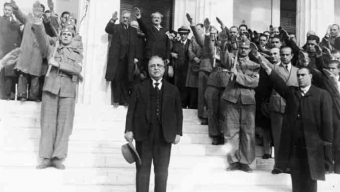 The neo-Nazi Golden Dawn party has visited the island of Kefalonia and asked Mayor Alexandros Parisis to help them restore and preserve the statue of the late Greek dictator Ioannis Metaxas which had been dumped in the countryside.
According to inkefalonia.gr, when they first found the statue of Metaxas, members of the Golden Dawn tried to pull it out of an aqueduct but feared it could be damaged and they didn’t have the means to transport and resurrect it.
Party leaders asked the city council permit them restore the statue “of our late Ioannis Metaxas which has been abandoned out in the countryside without any protection from rain and other bad weather conditions. We will fund the restoration by ourselves until the moment you decide to replace it in the island’s central square, where it used to be. To sum up, we ask you to correct a major historic mistake that has been made (in regard to the removal of the statue”.
Metaxas was born in Ithaca but raised on Kefalonia. On Aug. 4, 1936 he established a military dictatorship in Greece with the support of King George II, claiming that it was necessary to thwart a Communist takeover during a period of political instability.
During Metaxas’ dictatorship  a national youth service (EON) was established, forcing children to wear dark blue uniforms, similar to black uniforms that Italian dictator Benito Mussolini forced young Italians to don. Metaxas’ regime had many similarities to Hitler’s, requiring he be saluted the raising of the right hand, although he issued the famous “Oxi” demand when Greece was asked to surrender before World War II.
(Source: nocomments.gr, Greek school book of History for the 3rd grade of Lyceum)