Katrantzou Nominated Designer of the Year in London 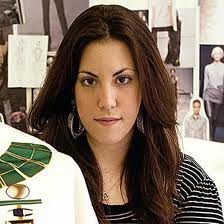 A Greek fashion designer now living in London, Mary Katrantzou, is among the nominees for Designer of the Year at this year’s London Fashion Week, set to begin on Sept. 14.

The British Guardian pointed out her work and said that, “There are some interesting nods that will surely cause a ripple.” In 2011, Katrantzou was awarded the Emerging Talent prize and was promoted in the Designers’ category quickly. Her rivals this year include Stella McCartney and Christopher Kane. The winners will be announced live at this year’s British Fashion Awards on Nov. 27.

According to her profile found on the London Fashion Week website, “Mary Katrantzou was born in Athens, Greece. She attended Rhode Island School of Design and then completed both her BA and MA at Central Saint Martins. She has previously worked for Sophia Kokosalaki and freelanced for Bill Blass, amongst other designers. She was awarded NEWGEN sponsorship for six seasons (spring/summer 2009 – autumn/winter 2011).”

Her spring/summer 2013 collection is inspired by world history, global exploration and Guilloche pattern play. Occasioned by her two-season partnership with Vodafone UK, in association with the British Fashion Council, the Director of Brand Marketing for Vodafone UK, Danielle Crook, told British Vogue that, “Mary Katrantzou is one of the most exciting designers in British fashion today – she was a natural fit to help us continue our involvement in fashion. Her bold graphics and iconic designs have attracted a cult following from every part of the fashion world and we are thrilled to be working with her.”