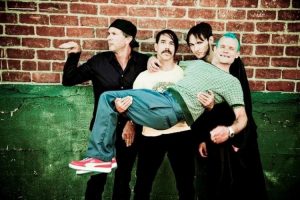 In all of their almost 30 years together as a rock band, the Red Hot Chili Peppers finally performed in Greece for the first time on September 4.
Taking to the stage at OAKA Stadium in Athens, bandmates Anthony Kiedis, Flea, Chad Smith and Josh Klinghoffer gave 60,000 audience members a show they won’t soon forget. Drummer Smith took to Twitter to show fan appreciation, saying “1st time in Greece and 60k fans come out to see us play??!! What an honor..thanks [sic] you!”
Included in the song set were many of their hits like “Californication,” “Under the Bridge,” “Suck My Kiss” and “Give It Away.” Some of the crowd captured the band’s performances on video and already posted them to YouTube.
Here is a promo Red Hot Chili Peppers initially put together about their show in Athens:
http://www.youtube.com/watch?v=chM3D4a_dEQ

Nick and Mary Mathews, who emigrated to the US and found prosperity there are symbols of the bond between Greece and the U.S.
Greek News

The first Orthodox Church in the US was established in New Orleans in 1864, built in 1866, by Greek merchants.