Greek Short “Out of Frame” Competes at Venice Film Festival 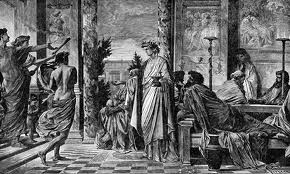 Out of Frame (Titloi Telous,) a short film by Greek director Yorgos Zois, will be making its world premiere on Sept. 7 at the 69th International Venice Film Festival, competing with 13 other movies selected for the Orizzonti section from around the world.

The new short film features no actors and was shot over 27 days within the winter of 2011 and the summer of 2012 in different parts of the city of Athens. Using only a camera, a microphone and a case full of lenses, the 11-minute long production presents the same sequences in different times.

Zois, 30, was born in Athens where he lives and works. He studied applied Math and Physics at the National Technical University of Athens and film direction at the Stavrakou Film School, Athens and at U.d.K Berlin, where he was awarded a scholarship by the Goulandris Foundation.

He is currently working on his first feature, Stage Fright, the script of which was awarded the development prize of CNC (French Film Centre) at the Cinelink Co-Production Market of the Sarajevo International Film Festival w011, while it has been selected to participate at the Torino Film Lab Framework 2012.