Biden to Ohio Greek-Americans: I am ‘Joe Bidenopoulos’ 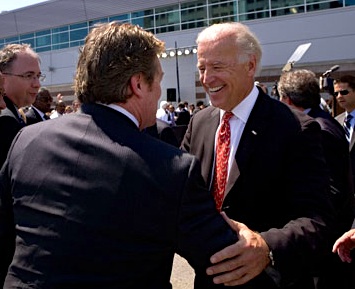 According to a pool report, Vice President Joe Biden speaking to a Greek-American supporter at a lunchtime stop in Ohio showed his Greek side and his love for Greece. The pool report noted:

Approaching a table of men he knew to be Greek, the VP said, “I’m Joe Bidenopoulos.”

“Ask George,” he said – unclear who George was, maybe someone at the table –“who’s the most Greek Irishman he’s ever known.” Sounded like Biden was suggesting he is.

Then, he moved on to a table of three women, who he briefly sat down with, before moving on to one where two women were sitting.

“Let’s dance,” he said to one, named Jennifer, as she stood up right next to him. They posed for a photo before he turned to her tablemate, who was wearing scrubs, and asked, ‘Are you a nurse?” He then sat down and started speaking to her quietly, presumably about nurses.

At the second table he went to, a man put him on the phone with a woman named Charmaine. “Hey Charmaine, this is Joe Biden, Vice President Biden,” the pool heard him say. “Well, I came in here for your husband to buy me a cup of coffee, he’s sitting here working hard.”

He wrapped up the call with “Nice to talk to you, Charmaine.”

Lots of hand shaking, photo posing, two kisses for women, including one on the top of a woman’s head.

One man was introduced to him as “Paul Newman,” which got a laugh from the VP.

The vice president also got a snack at a restaurant, a Greek diner in downtown Warren. “Can I get some rice pudding to go?”

In the past years Biden has also called himself Greek at different occasions, including when he said that he is an honorary Greek at a White House reception for Greek Independence day. Watch the video of VP Biden stating that he is “an honorary Greek.”