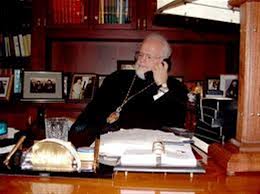 Metropolitan Methodios of Boston offered the prayer on Aug. 29 at the Republican Party’s Convention in Florida during prime time coverage on television. Methodios has been associated for years with the GOP nominee Mitt Romney, who was governor of Massachusetts.

Archbishop of America Demetrios will not be able to attend the convention, as he was paying a visit to the Ecumenical Patriarchate in Constantinople. He had been invited to many such ceremonies and offered similar prayers to nearly all party conventions ever since 2000 when he was inaugurated Archbishop.

Metropolitan Methodios’ appearance gave the Greek Orthodox Church a spot in the limelight during the 2012 U.S. Presidential election that is starting to heat up, with little more than two months before the Nov. 6 election that will pit Romney against the Democratic incumbent, Barack Obama.