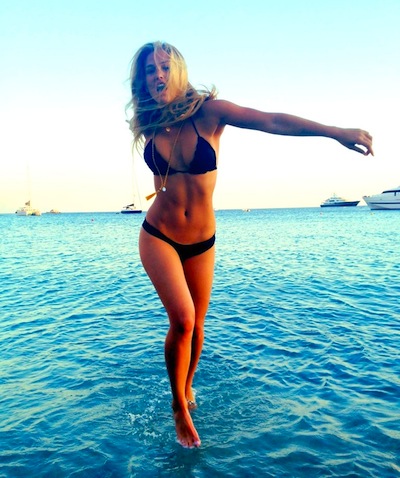 Israeli supermodel Bar Refaeli spends her summer vacation on a Greek island as beautiful as she:  Mykonos, the most famous in the Cyclades.
She seems to be enjoying it, given the excitement on her Twitter posts – she has 292,000 followers – and that it’s the second consecutive year she chose Mykonos for her holiday. Bar wrote: ‘Good morning! I am walking on water today. What r u doing?”

She uploaded photos of her walking by the beach on a black bikini having the time of her life. Refaeli came to Greece to take a professional photo shoot on the well-known cosmopolitan island and decided to combine her obligations with some fun time.
The 27-year-old, who became world famous as Leonardo Di Caprio’s former girlfriend, appears to  love Mykonos. Among the professional photos she uploaded, there were also photos of the island’s unique landscapes. Apparently, she couldn’t help capturing the marvelous scenery with her camera, but beachgoers seemed more captivated with her shape.