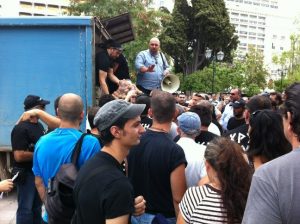 Greek extremist party Golden Dawn gives free food to Greek citizens only in downtown Athens. How can they be sure that people gathered around them are Greek, you ask? They are asking for the recipients’ ID cards to prove their nationality.
According to the far-right party’s officials, the unemployed and the families with many children were served first. More than 200 people showed up, according to witnesses.
One woman in the queue told the BBC channel that the initiative made “Golden Dawn much more attractive”.
Moreover, Golden Dawn spokesman Ilias Kasidiaris said the food, which included potatoes, pasta, milk and olive oil, came from Greek firms and Greek producers only in a bid to avoid previous ‘mistakes’ in past when soup kitchens offered items bought from German supermarkets.
The Greek state and police officials reacted to the party’s decision to give free food at Syntagma Square, just right in front of the Greek Parliament. They ordered them to leave the Square since “Syntagma, the capital’s most famous square, is not available for such actions.” But the Golden Dawn members ignored orders.
MP Ilias Kasidiaris described Mr Kaminis, mayor of Athens, as “mayor of illegal immigrants” and concluded in a clearly insulting language that Golden Dawn will keep flouting Greek officials’ decisions exactly like Greek citizens do.
“Athens mayor Giorgos Kaminis does not mind when illegal immigrants and anarchists use the square,” said Mr Kasidiaris according to Ekathimerini website.
Another Golden Dawn distinguished member, Mr Ilias Panagiotaros, stressed the fact that the party bought the food items with state money. “Our slogan is state money returns to citizens,” concluded Mr Panagiotaros.
(Source: IBT)