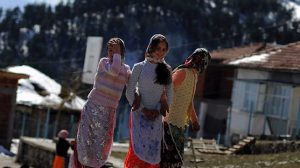 Their religion is the main difference between them and Greek natives. In Bulgarian villages such as Pashovi, especially in those resided by Pomaks, you may find mosques not Orthodox temples. They are very small and attendants are always on alert “because you would better be ready for anything,” says a 35-year-old Pomak.

This Muslim minority, despite living right on the Greek-Bulgarian borders and feeling as if both countries could constitute their homeland, faces many problems and is not welcome by any of them.

Pomaks have their own dialects, rather similar to that of Christian Bulgarians and many of them speak fluent Turkish, Albanian or Greek. Sociologists have not yet come to a certain conclusion on their origin. Some claim that Pomaks are a Slavic Muslim population, but others believe that they are Bulgarians who turned to Islam during the Ottoman occupation in the Balkans.

Many Greeks believe that religion plays a major role for social relationships and as a result, both the state and citizens, ignore Pomaks as if they do not live in Greece. The same is the case with Bulgaria and as a result, Pomaks exist but are totally forgotten by all, or at least, most of Greeks and Bulgarians.