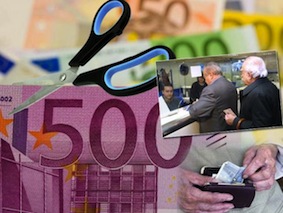 The Greek government plans to cut lump-sums paid to civil servants on retirement by more than a fifth, according to the civil servants’ union, which said it will resist the measure.
The one-time pension payments are set to fall by 22.3 percent, on top of a 20 percent reduction in earlier rounds of austerity measures, the union, ADEDY, said in an e-mailed statement. The union’s leadership met with Labor Minister Ioannis Vroutsis in Athens yesterday. The minister rejected proposals for securing the viability of civil servants’ pension funds, according to the union statement.
“The government’s now-stated decision to proceed with drastic new cuts to public workers’ insurance and pension rights is a cause for war for civil servants,” the union said in the statement. “We demand that the government respect and honor its commitments not to cut workers’ and pensioners’ incomes further.”
Greece’s coalition government is working on an 11.5 billion-euro ($14 billion) package of measures for the next two years to convince international creditors to disburse bailout loans. About 8 billion euros of cuts and savings had been found as of July 18, when a meeting was held between Prime Minister Antonis Samaras and the leaders of the two other parties in his coalition, a Finance Ministry official said.
ADEDY said in its statement that the financial viability of state-run pension funds was damaged by the forced inclusion of their Greek government bond holdings in a 200 billion-euro debt restructuring this year.
(source: bloomberg)

Greece started the the free distribution of Covid-19 self-tests by pharmacies, exclusively to high school students aged 16-18 and teachers.
Greece