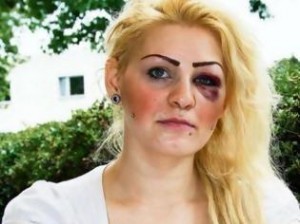 A young mother, aged 19, along with some friends went last week to a Berlin-based open area, where several events take place each year, to watch the football match between Greece and Germany.

As she is both half Greek and half German, she supported both football teams. In a bid to express her double allegiance, Angelina L. covered her body with both flags. According to an interview she gave to German Bild newspaper, from the first moment that she stepped into the subway, everyone was staring at her and some of the other passengers did not even hesitate to laugh at her.

The match ended, Germany beat Greece 4-2 and her male friends headed to the nearest kiosk to buy some beers. The 19-year-old woman stayed behind with another female friend, discussing the match and waiting for their friends to return. “Suddenly, I saw a punch coming to my face,” said the woman.

The assailant managed to escape and got lost in the crowd, but the woman was transferred to hospital with a black eye as well some broken bones around her eye socket.