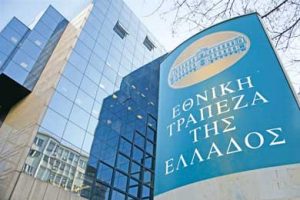 ATHENS – Greece’s beleaguered banks, beset by nervous Greeks yanking out billions of dollars in the frantic period ahead of the critical June 17 elections and holding on thanks to an emergency injection of $23.9 billion in a bailout, are hoping to get another $31.4 billion from the new coalition government of Prime Minister Antonis Samaras, whose Finance Minister, Vassilis Rapanos, was the President of the Bank of Greece, one of those which would benefit. With Greek banks getting so much public finding, there is worry that this pattern could lead to them becoming nationalized.
This week could determine the future of the banking system, a top official at a Greek lender told newspaper Kathimerini, as the new government will have to determine the details regarding the recapitalization process as soon as possible. The Greek banks were undercut by the previous Greek government, a shaky hybrid of Samaras’ New Democracy and Evangelos Venizelos’ PASOK Socialists – which are now working together again, this time with the participation of the tiny Democratic Left party. Venizelos, as the finance minister in the previous coalition, imposed 74 percent losses on private investors, including small bondholders in Greece and the Diaspora who had put their savings into Greek bonds, only to be nearly wiped out.
Samaras and Venizelos said they will make Greek banks whole again, but there has been no word from Samaras as to his pledge to return money to people who put their investments into Greece only to find their bonds were nearly worthless. If Samaras’ government can succeed in negotiations with Greece’s lenders, the Troika of the European Union-International Monetary Fund-European Central Bank (EU-IMF-ECB) the remaining $31.4 billion to finance the Greek banks could be disbursed by the end of July. The first partial bailout went to the four biggest financial institutions, the National Bank, Alpha Bank, Eurobank and Piraeus Bank.
Kathimerini said that the details of the process, including the conditions and structure of the recapitalization, will determine the future and structure of the banking system and that the most difficult issue is that of the incentives for private investors to participate in the shared capital increases. Banks and investors are keenly anticipating ministerial decisions on the possibilities of private sector investment in the industry. After being burned by Venizelos, whose decision has essentially prevented Greece from going to private investors anymore, the government is trying to find some way to lure some of them back.
“For the private sector to have some substantial incentives to participate in the process, it will need to be ensured that its participation will be under the same terms as the (Hellenic Financial Stability) Facility,” the Hellenic Bank Association noted recently in a text about proposals submitted to the Finance Ministry. Otherwise, the banks warned, attracting investors will be particularly difficult, which would lead to the nationalization of the credit system.
Bank officials suggested that without a strong banking system which is able to tackle the problems and challenges at the current juncture, the efficient funding of the economy will be impossible and Greece could find it nearly impossible to get out of its crisis and a crushing $460 billion debt created largely by alternating New Democracy and PASOK administrations packing public payrolls with hundreds of thousands of needless workers for generations in return for votes.
Troika officials said they want Greece’s banks to stay private, given the notorious inefficiency and lingering corruption in the Greek government, with critics fearful that nationalizing Greek banks could make them patronage havens for political supporters. The previous temporary government headed by former ECB Vice-President Lucas Papademos decided to postpone the recapitalization process that was expected to have been concluded before a first ballot on May 6 which led to a stalemate without a government being formed, creating the need for a second election. Kathimerini reported that, “The delays and inability to make a decision about the procedure reflect the worries about whether it would be possible to retain the private character of banks given the huge amount of funds the public sector will contribute toward the system’s recapitalization.”
Greece is surviving on a first rescue package from the Troika of $152 billion in loans and awaiting a second for $173 billlion that had been held up until after the June 17 elections amid Troika fears that the anti-austerity Coalition of the Radical Left (SYRIZA) would have tried to re-do the conditions or renege on them and nationalize the banks. Ironically, Samaras has followed many of the SYRIZA plans and said he wants to renegotiate the terms of the bailout that he signed and supported before he flip flopped on his decision and now  opposes once again, at least in part.