Sigh of Relief at G20 Summit Over Greek Election 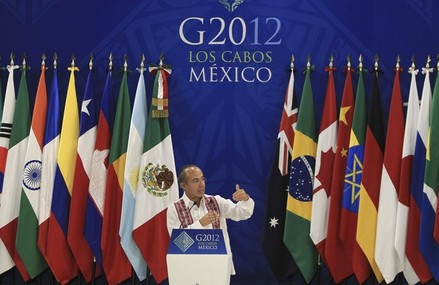 Leaders of the world’s largest economies began to assemble Sunday in a Baja California desert resort just as Greece’s pro-bailout New Democracy party won the national elections, a vote for the financial status quo that could keep panic under control at least for now.
A vote against the pro-bailout party could have forced Greece to leave the joint euro currency, a move that would have had potentially catastrophic consequences for other ailing European nations and the global economy.
Most European leaders were on the long flight to Los Cabos, or put off their travel until the results were in, but the politicians and businessmen already in Los Cabos appeared deeply relieved.   “The Greek people have spoken,” European Council President Herman Van Rompuy and European Commission President Jose Manuel Barroso said in a joint statement. “We salute the courage and resilience of the Greek citizens, fully aware of the sacrifices which are demanded from them to redress the Greek economy and build new, sustainable growth for the country.”
As the pair indicated, the path ahead for Greece, and by extension the bigger economies of Italy and Spain, remains unclear and market turmoil could erupt again at virtually any moment.  Before the latest Greek results came in, Christine Lagarde, head of the International Monetary Fund, was grim-faced as she addressed the B-20 meeting of world business leaders running up to Monday’s G20. She beseeched the businessmen to exert their influence and pressure world leaders to address the “mission-critical” priority of restoring investor confidence in the world economy.
“Be as blunt as you can with the G20 leaders,” she said. “Prioritize and indicate what in your view, in the view of the investors around the world … is critical as far as you are concerned to restore confidence.”
(source: AP)