Darwin Gearing Up for the Greek Glenti Festival 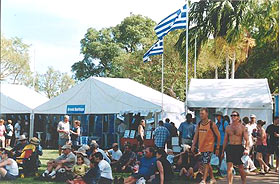 The annual Greek “Glenti” in Darwin attracts many Greeks and Australians every year, as it is a major festival promoting and celebrating Greek tradition.

But this year, the representatives of Greek communities in Australia report a high increase in their members and thus, they expect many more attendants to this year’s Glenti. Financial troubles in the homeland were instrumental in bringing many Greeks to Australia. As a result, 200 more students will take part in the dance groups this year, while the groups themselves will double into two.

The 2012 Greek Festival of Darwin will take place at the Bicentennial Park on Saturday 9 and Sunday June 10th, kicking off at midday. Taking advantage of the Monday, which is a public holiday for Australia, the revelers will enjoy the festival without too many worries.

This traditional festival celebrates everything Greek–food, ethnic dances and songs. The Greek community shares its culture via  food, wine, dance and music with locals and visitors alike. The Glenti would not be complete without entertainment compliments of  local and interstate entertainment troupes. Additionally, native cooks will prepare staple dishes for everyone–patsas, dolmathes and moussakas to start, and loukoumathes and an assortment of representative sweets to end for dessert.