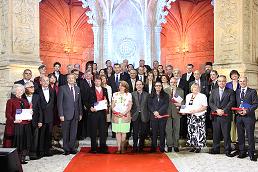 On June 1, the EU prize for Cultural Heritage/Europa Nostra was awarded. The ceremony took place in Lisbon, Portugal, with Greek-Cypriot Commissioner Androula Vassiliou announcing the six winners. Among them, there was one Greek project from the Architect School of the National Technical University of Athens. The project was the restoration of the Averof Building.

Europa Nostra is a network of more than 250 NGO’s and has thousands of members in more than 50 countries. It was founded in 1963 and since then, its main goal has been to preserve the cultural heritage of Europe and promote sustainable development with regard to cultural heritage. The Prize was first awarded by Europa Nostra in 2005. Prizes are given in two categories. Each of the best six projects wins a Grand Prix and 10,000 euro while the best 25 receive an award. Competing categories include research, conservation, dedicated service by individuals or organizations, education and training. Greek projects have achieved well other years also. In 2005 and 2006, projects won an Award, in 2009 one project won the Grand Prix and another the Award, in 2010, Greece also won another Award and in 2011, Greece won an Award and Cyprus a Grand Prix.

The ceremony was held in Jerónimos Monastery in Lisbon in the presence of Androulla Vassiliou, European Commissioner for Education, Culture, Multilingualism and Youth, and Plácido Domingo, the world-renowned tenor and President of Europa Nostra. The winner of the public choice award, chosen in an online poll from the 28 overall laureates for 2012, are the fortification of Pamplona in Spain. The jury commented, “The restored fortifications are no longer a defensive wall, but a meeting place and a symbol of unity for the citizens and for the town.”

Speaking ahead of the ceremony, Commissioner Vassiliou commented, “For 10 years, the EU Prize for Cultural Heritage / Europa Nostra Awards has become the most prestigious of its kind in Europe. I would like to thank all the winners for their energetic commitment to protecting our cultural heritage and Europa Nostra and the juries for their sterling work. The Prize has proven very effective in raising awareness among decision-makers and the public about the value of cultural heritage for European society and the economy and our responsibility for protecting it for future generations. This is why we intend to continue supporting cultural heritage through the Culture program and the future Creative Europe program.”

Europa Nostra’s President, Plácido Domingo, added, “Our award winners stand for excellence, for passion and for dedication. They are perfect ambassadors of the power of our ‘Creative Europe.’ Europa Nostra and the European Commission are committed to unlocking the full potential of Europe’s cultural and natural heritage. They are the key to social cohesion as well as for sustainable economic growth in Europe.”

Averof building is in the center of Athens, on Pattision Street. It was built in 1873 by the famous Greek architect Lyssandros Kaftantzoglou. It is the first building of the entire complex. It was named Averof by George Averof, a rich Greek who’s funding made the construction possible. The University was later called “Metsoveio” to honor Metsovo, a small Greek city which is the birthplace of famous Greek philanthropists, such as Averof, Tositsas and Stournaras. This is also the building which students occupied in 1973 in the “Polytechneio” rebellion against the military dictatorship. The door that was pulled down by tanks is exhibited along with statues in memory of the students. The conservation work started with an estimation of the initial building, as the building has had minor changes during the last century. The proposed plan included restoring the building as it was initially, strengthening its structure, modernizing it in the interior but keeping all the neoclassical elements in the exterior. Also, the project wanted to restore the building as a functional educational building. The goal was achieved when it was delivered in early 2010, almost 5 years after it had started. Nowadays, only the School of Architect uses its facilities exclusively. All other Schools use the building along with the University campus in Kaisariani, in the east of Athens.