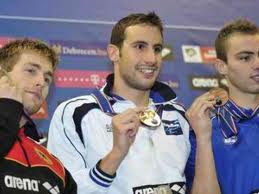 Aris Grigoriadis excels in swimming. His career includes many medals and distinctions but every gold medal makes his compatriots proud.

He managed to make an entire country smile, when they heard that the young athlete won the Gold Medal at the European Championship in Debrecen, Hungary.

He finished first in the 100-metres backstroke race and waved the Greek flag while on the top of the podium. With a time of 53.86, he beat German second-placed Helge Meeuw. Third place went to Israel’s Yakov Yan Toumarkin.

The 27-year-old swimmer already won another gold and a silver medal at the Eindhoven championship in 2008. He also got a silver and bronze medal at the European championship in Budapest in 2006. But his most thrilling success is, undoubtedly, his distinction at the 2005 Montreal World Championship, having won a gold medal in the 50 metres backstroke.

Grigoriadis has been a 50-metres-backstroke swimmer until recently. But he decided to compete in the 100 metres, since the 50 metres is not included in the Olympics and he would not have been able to participate at the London 2012 Olympic Games.