GRNews
GreekReporter.comGreek NewsEconomyReuters: Banks Prepare for the Return of the Drachma

Reuters: Banks Prepare for the Return of the Drachma 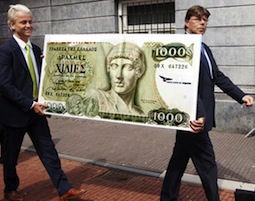 Banks are quietly readying themselves to start trading a new Greek currency. Some banks never erased the drachma from their systems after Greece adopted the euro more than a decade ago and would be ready at the flick of a switch if its debt problems forced it to bring back national banknotes and coins.
From the end of the Soviet Union – which spawned currencies such as the Estonian Kroon and the Kazakh Tenge – to the introduction of the euro, they have had plenty of practice in preparing their systems to cope with change.
Planning behind the scenes has been underway since Europe΄s debt crisis erupted in Greece in 2009, said U.S.-based Hartmut Grossman of ICS Risk Advisors who works with Wall Street banks, Reuters reported.
“A lot of the firms, particularly in Europe and also here, have been looking at that for a long time,” said Grossman, who added that the latest Greek political crisis had brought matters “to a little bit of a head.”
“But there really has been contingency planning at all of the financial institutions for that to happen … Greece leaving the euro zone is not a new idea,” he said.
The EU says it wants Greece to stay in the common currency, and opinion polls show Greeks want to keep it. But they also voted last Sunday for parties opposed to a bailout with the EU and IMF, throwing Greece΄s future in the bloc back into doubt.
The elections threw into doubt the EU/IMF aid package that came at the price of harsh austerity measures, and was reached only after much haggling between banks and politicians over a 100 billion euro debt reduction.
While the deal averted financial market catastrophe by allowing Greece to continue repaying its reduced debts, any future problems could be yet more troublesome, even if Athens managed the process in a more or less orderly fashion.
A Greek departure from the euro would create legal and practical problems for the banks which would dwarf the relatively straightforward technical job of dealing in a new currency.
Greece would almost certainly impose foreign exchange controls if it were to drop out of the euro, bankers said, but dealing in any new currency would still be possible.
“Forex desks can get ready relatively quickly. It depends on exactly how the exit from the euro happens,” said Lewis O΄Donald, the London-based Chief Risk Officer at Japanese investment bank Nomura.
Currencies that are not freely tradable, such as the Chinese yuan, are widely mirrored in off-shore foreign exchange markets through the use of derivative instruments, such as non-deliverable forwards, or NDFs.
The problem may be bigger for euro zone banks which need cash for individuals or companies doing business in Greece. They face the problem of what exchange rate to use, depending on the laws Athens might draw up for trade it its currency.
If Greece forced an exchange rate of, say, one euro to one new drachma, this could impose huge losses on foreign banks because such a rate would not hold on the markets.
Controls on the movement of capital could be a nightmare for banks with loans in Greece, potentially making it illegal for companies to repay debt in euros.
Even if it were not illegal, companies might no longer be able to repay foreign creditors because their cash had been converted overnight into drachmas – a currency that would rapidly lose its value due to the dire state of the Greek economy. That would, in turn, make it tough for any lender to get its money back, whatever contract it might have.
“Our assumption is that an exit route somehow has capital controls in place, or an inability for a creditor to enforce (legal rulings) under English law into Greece,” O΄Donald said.
Banks have studied several options to protect themselves as best they can, including switching to U.S. law for new derivative transactions or loans. So far few have taken such steps due to doubts about how effective they would be, and also because they are afraid to add to market concerns.
“Banks are very, very reluctant to start shouting ΄fire!΄. They know what happens and what panic looks like,” said one London-based lawyer advising financial firms.
Instead, most are simply checking the governing law of their contracts, hedging against defaults and running through every legal argument a Greek euro exit could throw up.
“There are still areas which will be grey in some respect and which will lead to conflicts of law that may have to be resolved in court,” Nomura΄s O΄Donald said.
Many banks have been simulating a rupture of the euro in “war games.” But little is known about how an exit would work, and legal departments are poring over financial contracts, raising questions about the very nature of a currency.
“If transactions are denominated in the euro, what is the status of those transactions in the event that there is a change of the make-up of that currency?,” said Miles Kennedy, a partner at accountancy firm PricewaterhouseCoopers.
With such questions unanswered, stuffing cash machines with enough drachma banknotes is almost an afterthought.
For Greece itself, it certainly won΄t pose a problem. The country΄s national bank has its own banknote printing press and mint and has continued to print euro banknotes ever since joining the single currency in 2001.