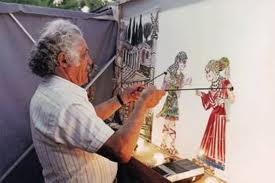 Hellenic Broadcasting Corporation (ERT) presents renowned Greek shadow puppet player Evgenios Spatharis, which they have digitized. The episode featured by the ERT archives is “Evgenios Spatharis-1959.”
Despite the fact that the puppet player began his performances in 1942, the documentary focuses on 1959, when Spatharis performed at the International Festival of Shadow Theatre in Paris.
From 1954, when Spatharis first performed in Cyprus, through 2004, he visited several countries to perform his shadow puppet “Karagkiozis.” Performances and seminars took place around Europe, where he taught his art and techniques and became famous abroad.
The most famous play of Spatharis is undoubtedly “Alexander the Great and the Cursed Snake,” which is the episode ERT pays special tribute to.