Youth Dream of Emigration; Few Do It 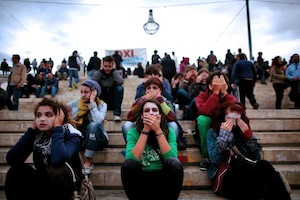 It may be happening on a lesser scale than the great migrations of the early 1950s and 1960s in the poverty that followed the war, but now in its fifth straight year of recession, Greece is once more witnessing an exodus of thousands of its youth, seeking better fortunes abroad.
A recent study undertaken by Thessaloniki University has shown how the great majority of these emigrants, and of those wishing to leave, belongs to the younger generations. Their destinations include such countries as Australia, Russia, China and Iran.
This drive to leave the country appears to be curbed to some extent by a real fear of the unknown, combined perhaps with a fear of separation from the protecting family.
Another survey, published today by the Athens Parthenon University, shows that seven out of ten young Greeks would like to leave their recession-struck country in search of a better future, but that fewer than one in five has actually taken any steps to prepare for their departure.
Conducted in January by the Focus Bari company using a sample of 444 people aged between 18 and 24, the study shows 76% of interviewees believing that leaving Greece would be the best response to the effects of the economic crisis. However, for most of them, the idea of leaving appears a dream that cannot come true. Half of those interviewed (53%) spoke of having thought about emigrating, while just 17% said that they had resolved to leave the country and that they had already undertaken preparatory actions.
A slightly lower percentage (14%) stated that they were forcing themselves quite consciously to stay in Greece, as it is their generation that has to bring about the changes that the country so desperately needs.
Nonetheless, just a few months ago another study carried out by Stedima Business Consultants revealed 95% of Greek parents being ready to encourage their children to go and work abroad.
Unemployment in Greece stood at the record rate of 21.8% in January, while the number of unemployed among those aged under 25 reached 48%, or one in two young Greeks without a job.
As things stand and with expectations of an economic recovery ten years away into the future, it is obvious that this brain drain will continue. In 2011 alone, around 2,500 Greeks moved to Australia while the country’s authorities say that another 40,000 at least would like to follow in their steps.
In October, a “Talent Fair” organized by the Australian government, was held in Athens with 800 jobs offered: 13,000 applicants have already taken part.
The new exodus will be of younger and better-trained Greeks – those who speak more than one language but who cannot make ends meet in a country whose economy is in free fall. Some predictions put a more pessimistic cast on these forecasts, speaking of the loss of two generations in the country.
(source: ANSA)