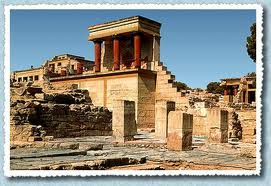 Knossos is an archaeological site of the Bronze Age on the island of Crete. Minotaur, a mythical creature with the head of a bull and body of a man, was believed to protect the city of King Minos and to live inside a maze near Knossos.
Greek officials decided to combine Knossos with every other archaeological site of the region, such as Dionysus and Ariadne Villa. They announced their intention to make Knossos an open museum, where visitors can walk around the entire town to visit its sites.
Hellenic Minister of Culture and Tourism replied positively to the Cretans’ request. Mayor of Heraklion Yannis Kourakis, along with members of the city council and the President and Managing Director of the Company “Unification of Archaeological Sites and Urban Renewal S.A.” Dora Galanis, visited Knossos to examine the possibility of an open museum.
Mayor Kourakis stated that this plan would designate “one of humanity’s most important sites.” Moreover, he also expressed his aspiration for Knossos being included in the UNESCO World Heritage Sites.
An open museum is not a park or a building housing the exhibition. The entire city becomes part of the museum, which is why Greek officials also discussed reforming the local buildings as well.