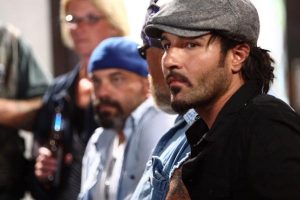 George Katt has proved his talent several times over the last years, with his participation in many independent feature films and has gained recognition, winning awards in film festivals. His latest award was Best Supporting Actor for his work in “Red Sheep” at the 2012 Los Angeles Movie Awards. His recent performances include the films “House of Bodies” and “Percentage.” George Katt told Greek Reporter how it was to work next to well known actors like Terrence Howard, Peter Fonda and Ving Rhames, as well as working alongside fellow Greeks.

Congratulations on recently filming a starring role in the feature film “House of Bodies.” The movie also stars three Oscar-Nominated actors: Terrence Howard, Peter Fonda & Queen Latifah. Can you tell us about your recent experiences or anything about the role?

Thank you. Yes, it was a wonderful chance to work with director Alex Merkin again. We had already worked together on “Percentage” and when the opportunity came up to work with him on another film and with such an amazing cast, I was all for it. I probably shouldn’t say much about my role in “House of Bodies” other than I instantly gravitated towards Raylan because of his complexities. He wasn’t easy to play and for me…I always look for a good challenge in roles. I had communicated with Alex before filming and we discussed the character’s compulsions, childhood behavioral characteristics…I wanted to dig into the reasoning for his sociopathy and we really wanted to bring a larger truth to the role rather than following a generic path that has already been seen and done before in the majority of Hollywood thriller films about serial killers. That would have been the easy route, but we worked to make him memorable by grounding him in truth and humanistic propulsion in order to drive his disturbing behavior. And it is very disturbing, I tell you…(laughs).

How was it working with Ving Rhames in “Percentage,” another film you just wrapped?

Awesome. It was fantastic. Super nice guy. He is a professional and one thing I observed was how extremely caring he was about the set and how giving he is to another actor. It’s just an honor to work with actors I grew up watching in great movies. Dreams do happen if you believe, stick to your guns and work hard. Ving and I have some great shootouts and moments in that film. It was such a pleasure.

You’ve wrapped quite a lot of new films that are currently in post-production and it seems like the genres of the projects vary and your roles are all very different from each other. How do you approach all of these incomparable characters or scripts?

Yes, they are. Very different projects. I don’t like to play the same role twice even if they fall into similar coincidences, life events or occupations. There is always a different burning light in each of these guys. Of course, I bring ‘self’ and my own life experiences or knowledge to the them because I believe in bringing truth and honesty. Sometimes I don’t know…it’s almost like a candle; the ‘self” is the wick or the root; wax is the imagination, the characteristics, the colors or behavioral patterns of the character; the fire is the event/s…the heat of it all. The wick and the wax will determine how he burns, the choices he makes; and then finally the smoke is the outcome of the decisions he makes. It will always smell different, rise differently and flow unpredictably. It will all depend on how he is molded…where he is rooted. I like to make sure I bring the wick and the wax and the script lights it all up for me. (pauses) Well, wow, how about that now? Did that sound a bit profound? Or just complicated? (laughs) But that’s a bit of a parallel I guess…I am always willing and committed to seeing how these guys they will light up, smoke or burn out.

Congratulations on recently winning the Best Supporting Actor award for your work in “Red Sheep” at The 2012 Los Angeles Movie Awards and on also being nominated for two more acting awards at the one festival [2012 World Music & Independent Film Festival] for two different films: the Best Actor award for “Conquering the Rose” and Best Supporting Actor for “In Montauk.” Has that ever been done before?

I’m not sure. (laughs) But yes it’s crazy and thank you. It is nice. I’m just very grateful. It has been a long road but well-worth every bit of it. We were also nominated for Best Ensemble Cast at Barebones International Independent Film Fest for “Conquering the Rose.” Everyone worked really hard on that film. I am proud of it. 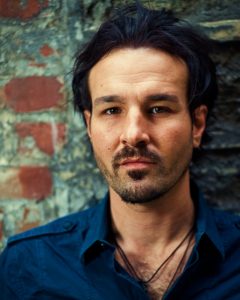 Tell us also a few words about the film “The Maladjusted” you did with Chris Kiros, a fellow Greek.

I play Robbie Petras, an aspiring writer that just hit his 30 mark. It’s a comedy and there are some hilarious things happening in the film. I think anyone heading into their 30’s will hit a few hilarious road bumps during that time, change in friendships, relationships…and that transition can be a joke in itself (laughs). Robbie begins to re-evaluate his path, his ambitions, he’s outgrown the way he was living and just now discovering all this stuff. And with that, his friendships and approaches are being re-evaluated. It is another role I wanted to ground in truth because…well, you know…comedy is just an exaggerated mirror of life’s tragedy…and I found Robbie pretty tragic. Chris Kiros is awesome. A great guy and he was a super director. He knew what he wanted and was able to express it in the most sincere, generous and professional way. We would curse at each other in Greek on set jokingly and laugh. I love that guy. Also, the rest of the cast — Tiffany Shepis, Clayton Myers, Rosebud Baker, Katie Foster, Michael Alban…they were all just rockin’. I loved working with them and it was a great shoot.

What future projects do you have coming up?

Well, besides these films finishing up post production and the ones that started to hit the film festivals, I am going to be doing a movie called “Hostage” soon opposite an old friend and a great actor Holt Boggs that will be directed by Mike Yurinko. I also began filming on a feature film noir thriller called “Mind Full of Blackbirds” directed by Adam Harvanek. It is a fantastic and very original script and we will be completing the rest of that one. Those are the more immediate projects I can talk about at the moment but there is more. I just love to keep busy. I love the work.