GRNews
GreekReporter.comGreek NewsEconomyGreece Will Bail Out Its Banks, But Not Its People

Greece Will Bail Out Its Banks, But Not Its People 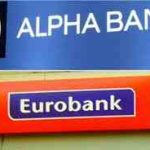