Tomb Dated Back to Greek-Roman Period Found in Alexandria 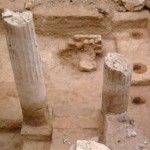 A tomb dated back to the Greek-Roman Era was found in Alexandria, Egypt. Archaeologists discovered the grave, which is dug into a rock and has a yard with columns in the center of the burial place.

Excavations were undertaken over the last few months in the area in order to find ancient remains. Had it not been for the findings, the area would have been considered for building prospects, but now officials are not sure this will happen.

The grave is the forth one found in that part of the city’s old eastern cemetery. Ceramic jars, bottles of perfume and oil lamps were discovered in the ancient burial places, according to the Director General of Alexandria Antiquities Mohamed Mostafa. Mohamed Ibrahim, Antiquities Minister, also was allured by a ceramic jar of the 2nd century BC.

Traces of red-colored drawings on the tomb’s walls decorated one of the graves and were fortunately preserved. Inside the grave, researchers discovered burnt human remains and a sign, on which was inscribed the name of a deceased person.

The second burial place has eight stairs, dug into the wall, and lies under a modern building. In the third and fourth grave, which was found even deeper, there are a great number of jars and oil lamps made of clay in many sizes and shapes.

Remains of a woman and her son of the late Roman Era were among the impressive ancient findings in Alexandria.