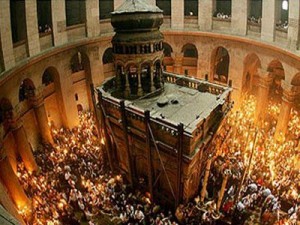 The Church of the Holy Sepulchre in Jerusalem, known as the Church of the Resurrection, has been an important pilgrimage destination since the 4th century. There are three major rights of the Greek-Orthodox Patriarchate over the pilgrimage area.

The first one is the key of the inside gate of the Church of the Holy Sepulchre, as the Exarch explains to ana-mpa.gr. Responsible for the key of the main entrance of the Church is a local Muslim family whose roots are associated to Prophet Muhammad. The Holy Community of the All-Holy Sepulchre, also known as Templars, have the right to open the Church’s gate using the inside key. The Orthodox monastic fraternity has guarded and protected the Christian Holy places in the Holy Land for centuries. Keeping the Sepulchre, Jesus’ burial site, and Golgotha safe, are two of the most significant pilgrim rights of the Greek-Orthodox Patriarchate.

The Holy Community of the All-Holy Sepulchre or Brotherhood of the Holy Sepulchre administers the Greek Orthodox Church of Jerusalem.

The Brotherhood of the Holy Sepulchre was traditionally founded in year 313, and the foundation of the Churches in the Holy Land by Constantine and St. Helen is traditionally dated to year 326. At first, it bore the name “Order of the Spoudaeoi (studious, zealous, industrious, serious),” or “The Spoudaeoi of the Holy Resurrection of Christ.” The Brotherhood was distinguished primarily for their observance of uninterrupted mental prayer and heartfelt supplication in the Holy Lands.

The Patriarchal School of the Greek Orthodox Patriarchate of Jerusalem (School of Sion) provides the Orthodox testimony of the Christian Faith at the Holy Lands. The Patriarchal School, which is a Gymnasium and Lyceum and fully equivalent to the public schools of middle Education of the Greek State, recognized by the State since 1911, follows the complete program of the Ministry of Education enriched by special subjects which cover Christianity’s special role. Graduates may be inducted to the Brotherhood and under the care of the Patriarchate, continue their studies in Greek or foreign universities.