The Holy Fire Arrives in Athens From Jerusalem 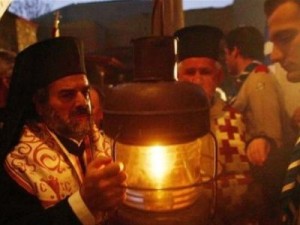 The Holy Fire has just arrived in Athens by plane. The state aircraft which transferred the Holy Fire landed at E. Venizelos Airport and was received with exceptional joy by hundreds of Orthodox Christians.
The Holy Fire will be taken to Metohi of the Holy Grave in Plaka (Anafiotika area) by the  Exarch of the Holy Sepulchre, Archimandrite Damianos, and will then travel all across Greece in special flights of the civil and military aviation.
The Holy Fire was received with great honor, equivalent to receiving state leaders.
Head of the Greek delegation is Most Rev. Pavlos, Metropolitan of Glyfada, while Deputy Minister of Foreign Affairs, Dimitrios Dollis represents the Greek government.
Holy Fire Ceremony in Jerusalem
Tens of thousands of Orthodox Christians gathered in Jerusalem at the Church of the Resurrection of Christ, awaiting the coming of the Holy Fire to the Holy Sepulchre.
Israeli public radio said around 10,000 faithful Christians (Eastern Orthodox, Catholic, Armenian Apostolic, Coptic Orthodox, Syriac Orthodox, and Ethiopian Orthodox) attended this year’s ceremony, fewer than in recent years, as police were deployed around the church and in the streets of the surrounding Old City to keep the jubilation from getting out of hand.
Patriarch Theophilos III traditionally made his grand entry at the head of a procession of monks, chanters, dignitaries and red and gold banners bearing icons.
After circling an ornate shrine in the heart of the church three times amid chants of “Axios” (“He is worthy”),  Jesus’s burial site emerged minutes later with several lit candles.
According to believers, the Holy Fire has amazing properties. Many of those present in the Church of the Resurrection of Christ “wash” the Holy Fire, as the flame doesn’t cause any damage to their hair, skin, or clothing.